Give your waiting patrons something fun to do with our new collection of showstopping Horror themed Carnival Games! Each game is designed to be an immersive experience that is relatively familiar and based on a popular classic carnival game, yet has a fresh horror twist. Each game has a standard name, and has an optional Facade to set the scene for a terrifying yet fun experience. The games are designed to have minimal upkeep, and generate even more revenue.

Our friends over at Haunt News Network wrote a great article about our new lineup this season! View the interview with Dave, the President of the Scarefactory, below. 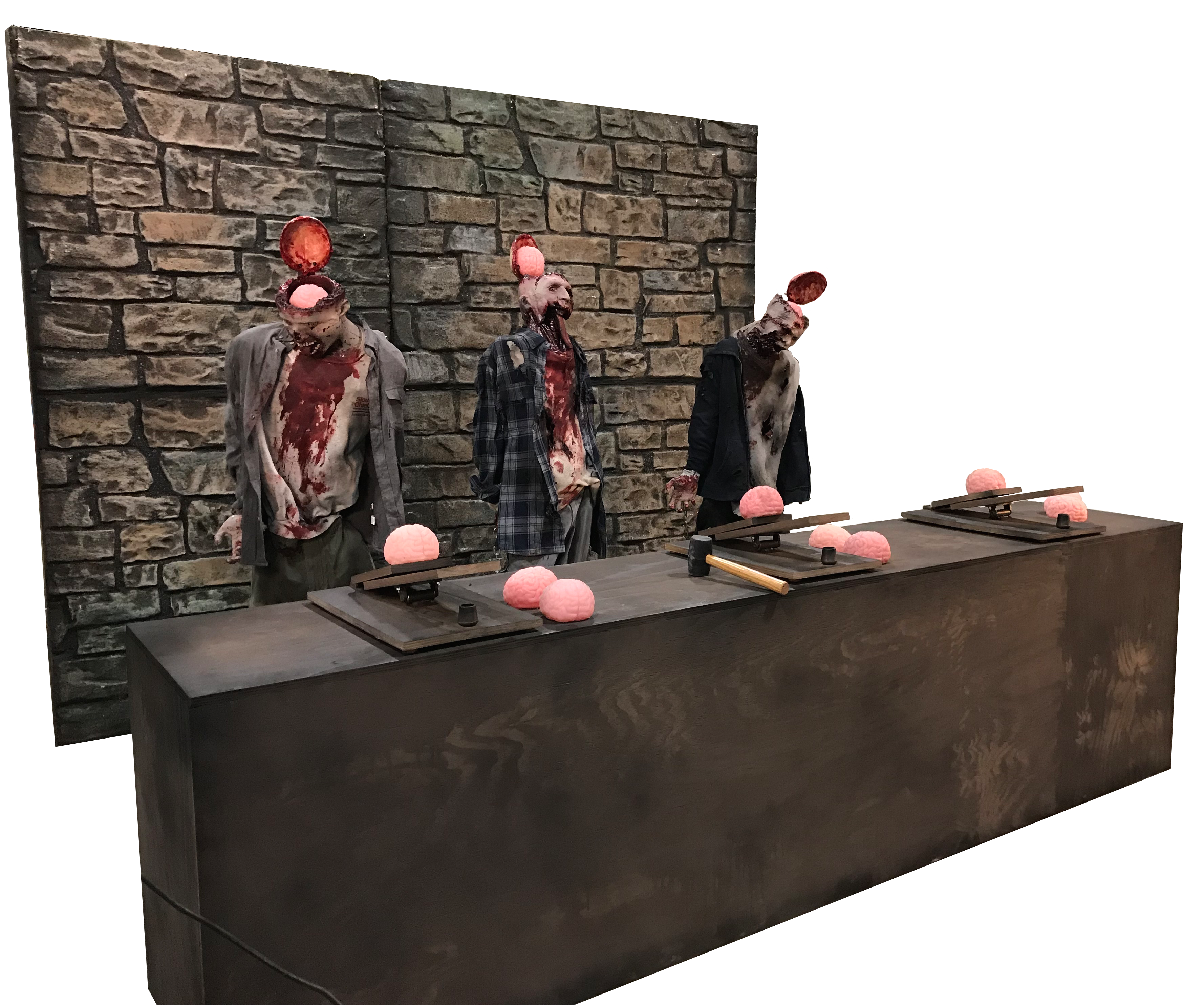 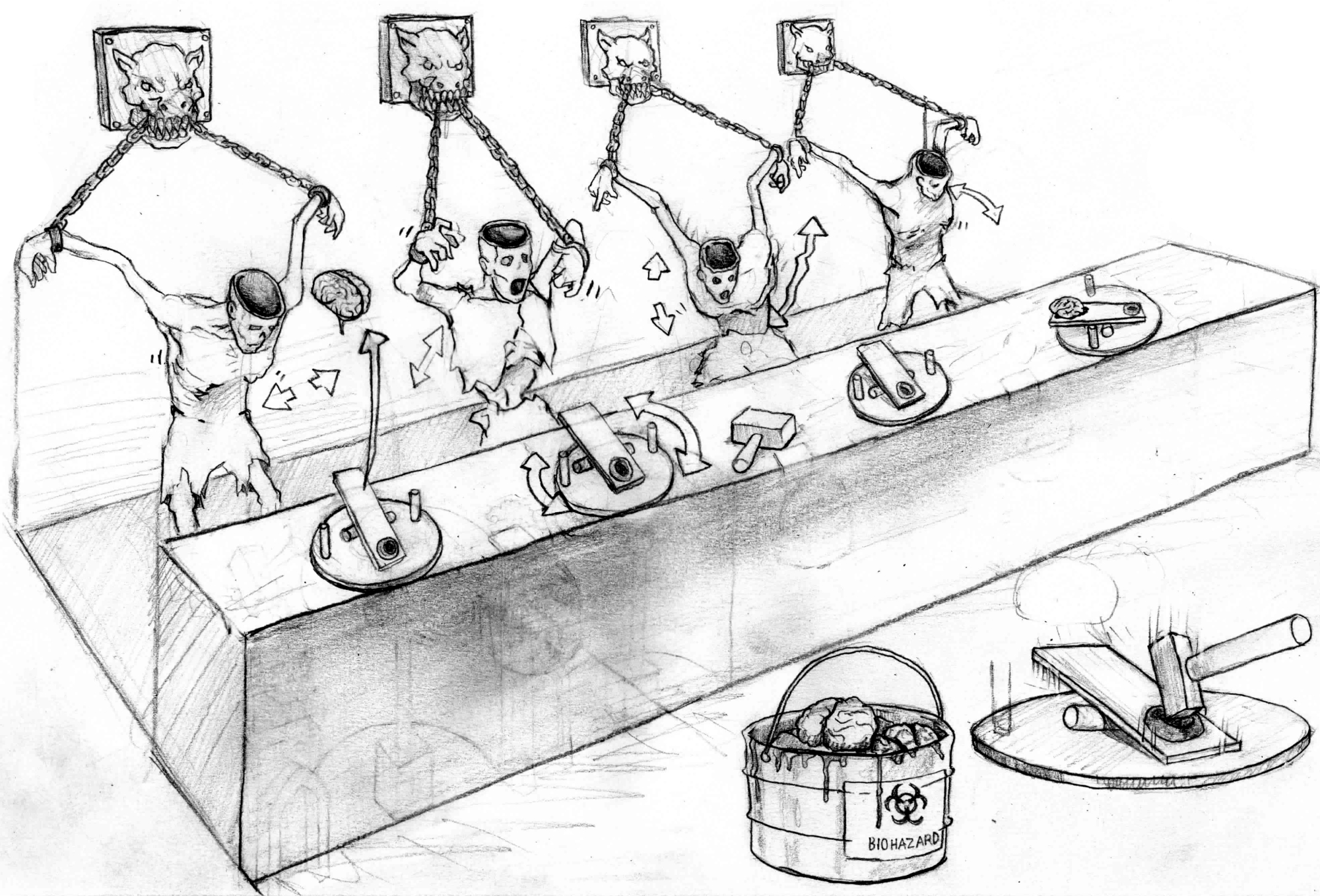 Based upon the popular “Frog Launcher” Carnival game, in our version Players reach into a bucket of gooey brains and place them on the launcher.  Players then use the mallet to attempt to launch the brain back into the skull cavity of the articulating Zombie chained in front of them.

In Multi-Player mode, the first player to successfully land a brain in the Zombie Skull Wins the Game!

A gruesome spectacle based upon the popular kid’s game, Players must have a steady hand as they use electronic tongs to extract body parts from a Zombified Corpse.  If they touch the edges of the exposed cavity a loud buzzer sounds, strobe lights flash, character screams and thrashes back to life as their turn is now over having failed the attempt.  Players spin a gruesome wheel (3) times to tell them which body part they must extract from Zombified Corpse, if they successfully extract three body parts they win a prize.  The Zombie character has a randomized timer that will unexpectedly cause the character to twitch at different times during the attempts making it more challenging and forcing the players to act decisively.

The game is designed to be set in an elaborate, bloody medical tent… the attendant is typically dressed as a nasty “Silent Hill” Nurse.  Players are positioned behind the table within the set making this an amusing Photo Op and spectacle for the spectators heckling their friends attempting to win the game. 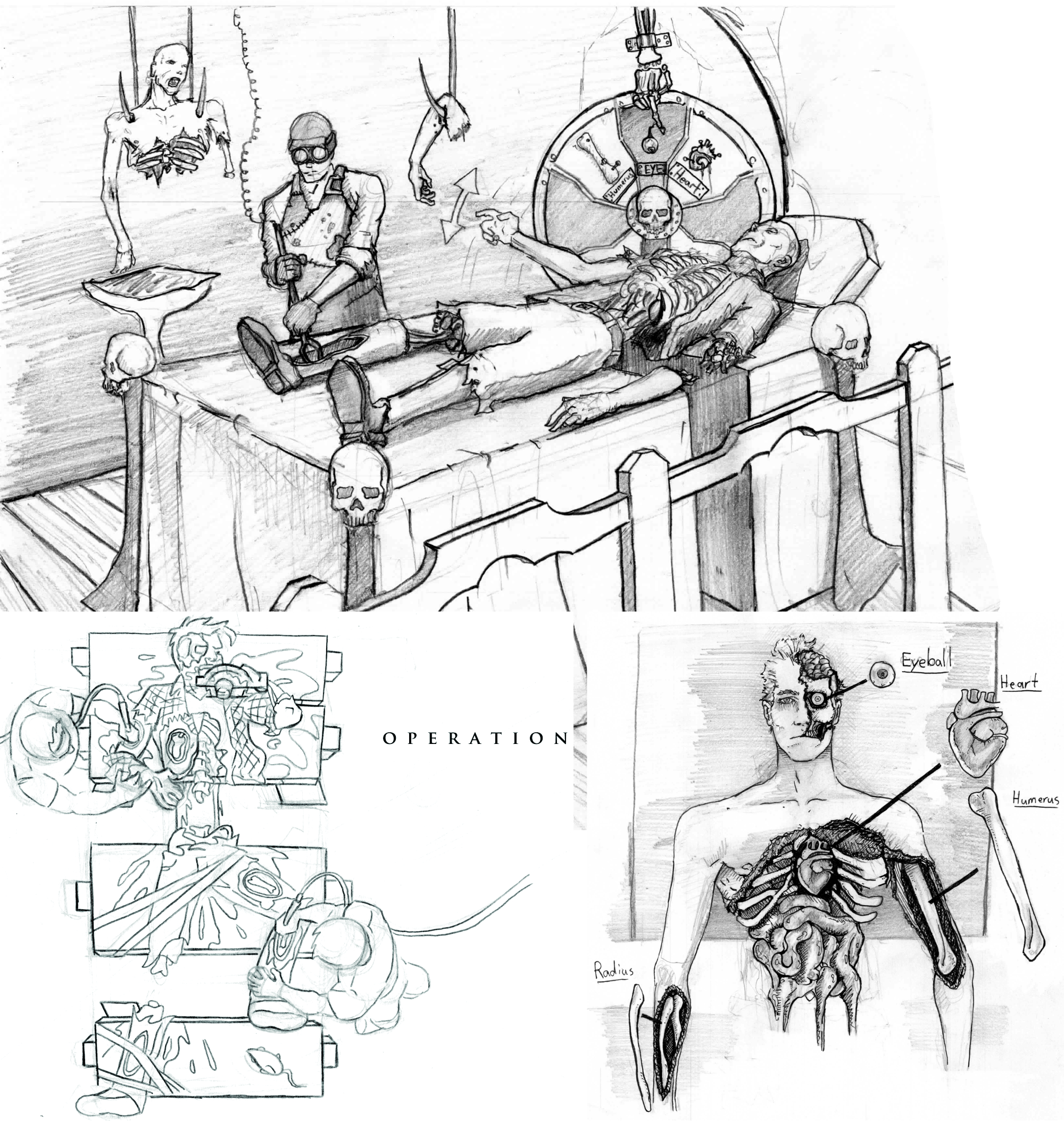 Multi-Player Mode: Allows a group of 2, 3, 4 or more Players to square off in a single elimination challenge, as Players take turns spinning the Wheel and extracting the body parts as their competitors cheer them on.  Mishandle your assignment and your out…last man to successfully complete the challenge wins the game! 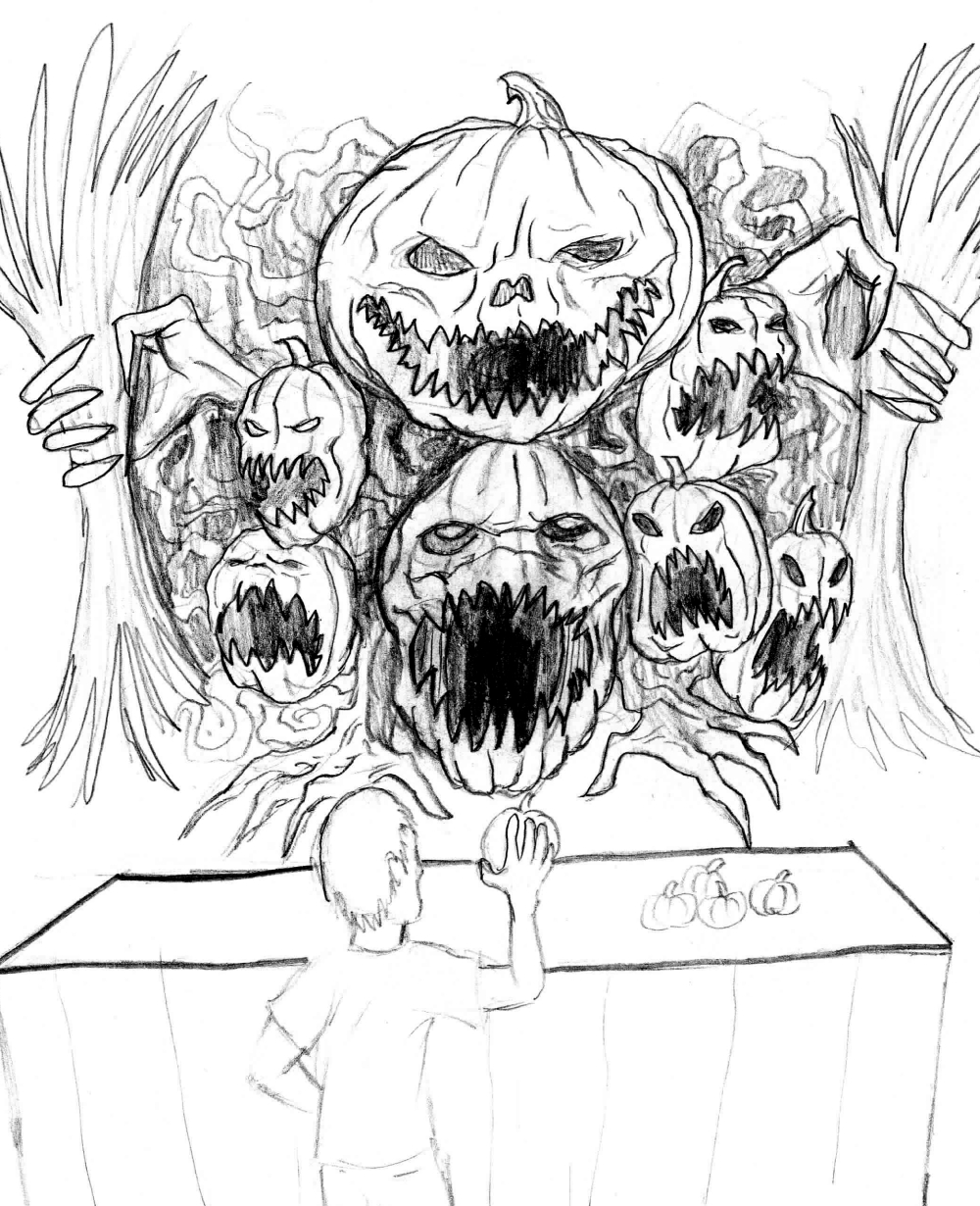 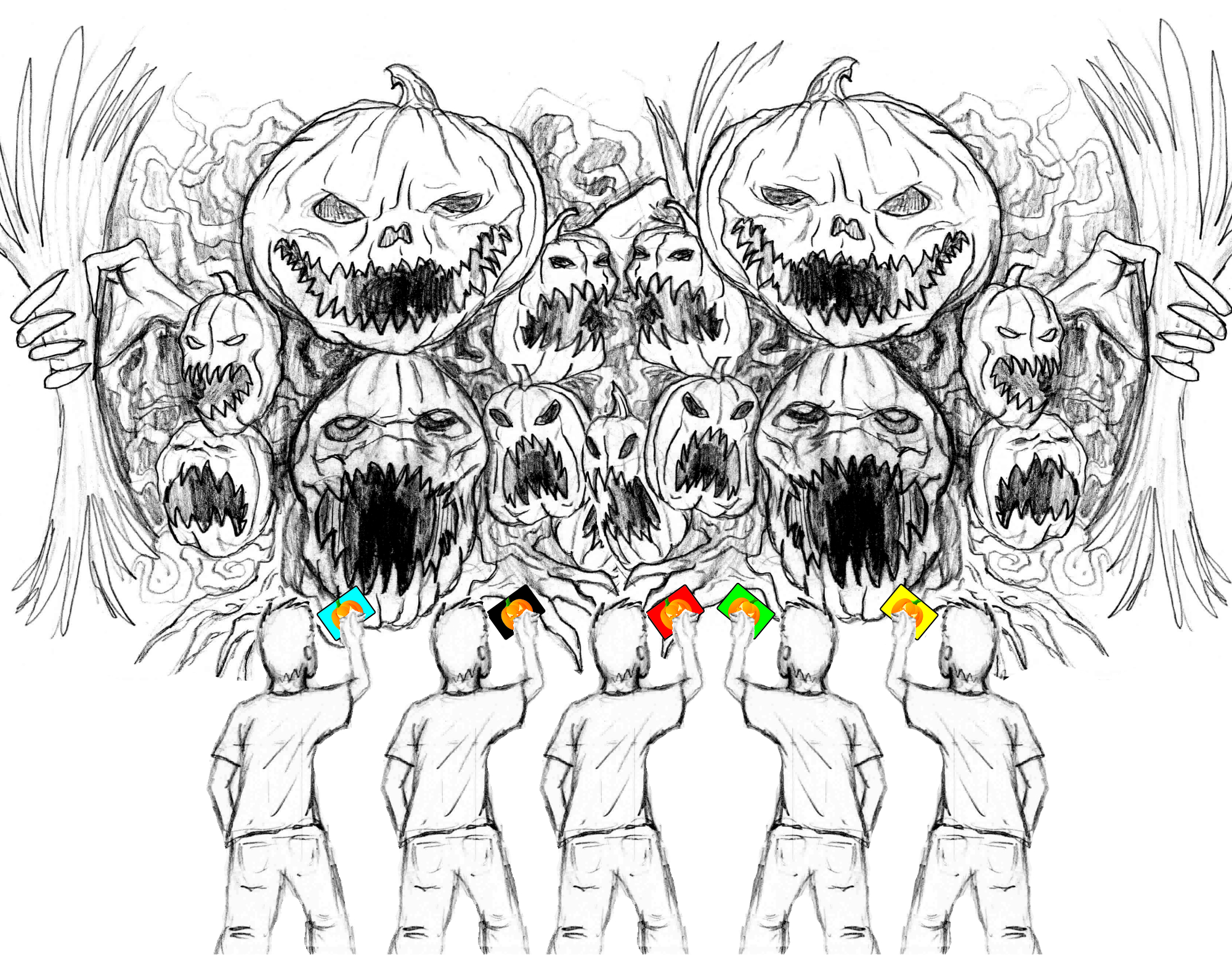 Multi Player: (5) Players get (8) chances to land Pumpkin Beanbag Balls into the munching mouths of the Pumpkin Gourd Horde.  Pumpkin mouths are motorized and Game includes sound track, fog machine and theatrical lighting.  Player who lands the most Pumpkin Balls wins the game.

Designed as a Multi Player Game- Burial Crypt Ring Toss is a game in which Multiple Players compete against each other as each Player gets (5) color coded rings and attempts to land his/her rings on creepily reaching hands of rotting corpses that are climbing out of tombs and burial chambers within the walled-up crypt set.  Characters as well as Hands/Arms are motorized, and Game includes sound track, fog machine, candle flickering lanterns and theatrical lighting.  Player that lands the most of his/her colored rings wins the game. 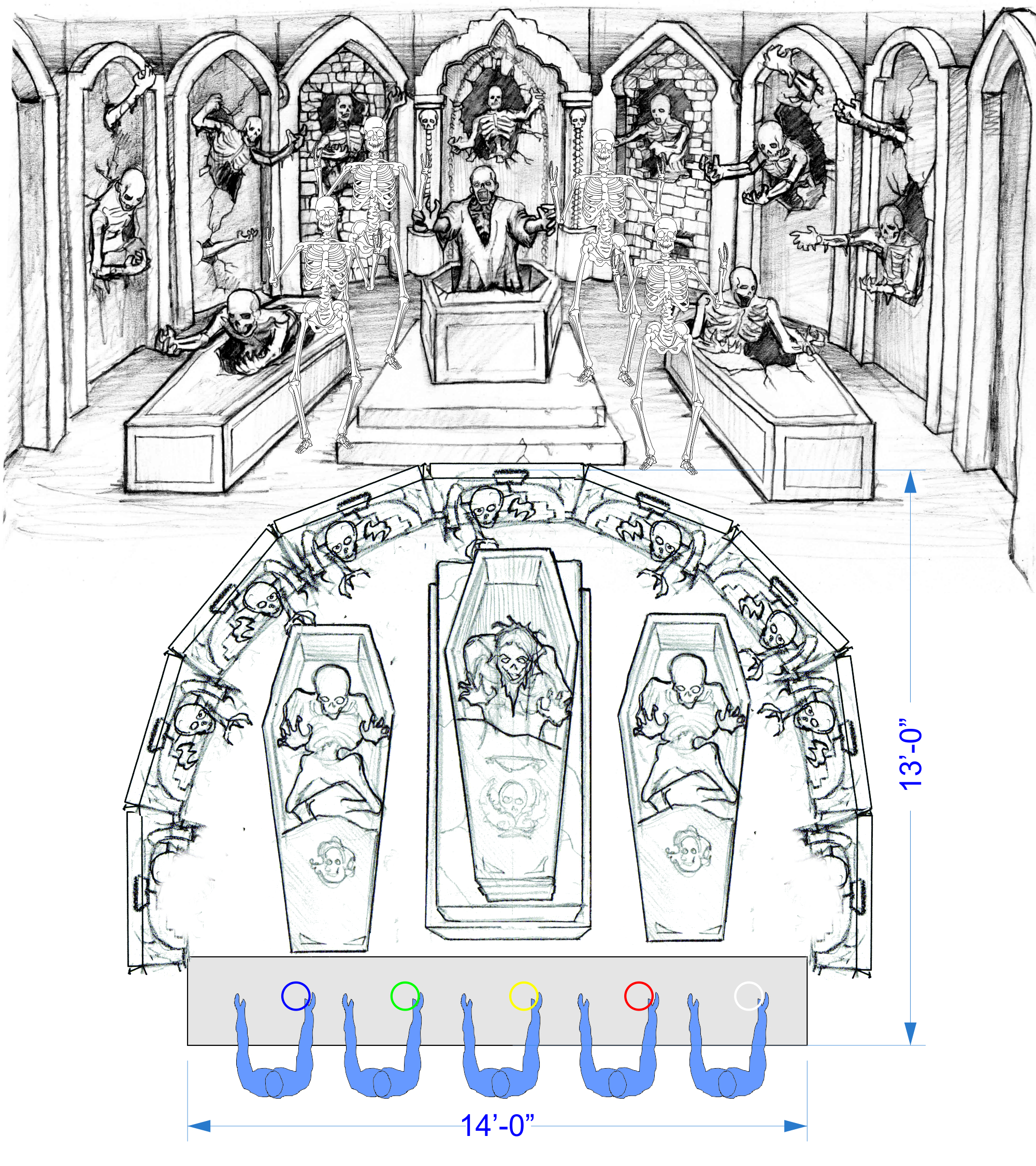 Players get (5) chances to land rings on creepily reaching hands grasping thru the openings of a rotting Tomb.  Hands/Arms are motorized and Game includes sound track, fog machine and green light emanating thru the cracks and openings of Tomb.  Players score small prize for (3) Rings and Large Prize for (5) Rings. 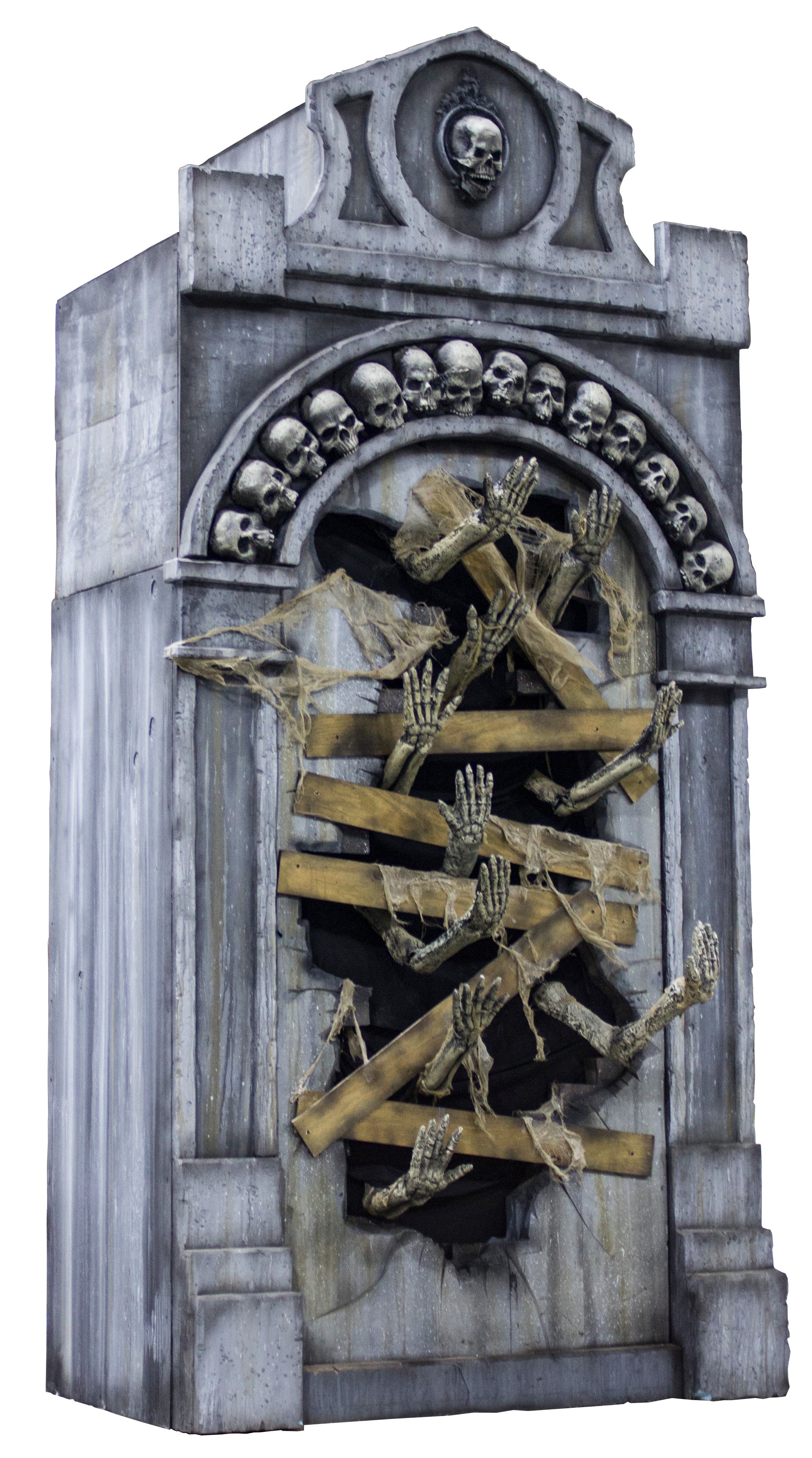 Based upon the popular “Angry Birds” game, our version features gruesome decaying human Scarecrows that have Crows picking at the eyes and flesh of the rotting Corpses.  Participants use a large slingshot to shoot pumpkin balls at the Crows in an attempt to knock them over.  If Players go (5) for (5) they win a Prize.  Add a second Scarecrow so that 2 players can square off head to head taking turns.  Can include a simple set to contain the entire game. 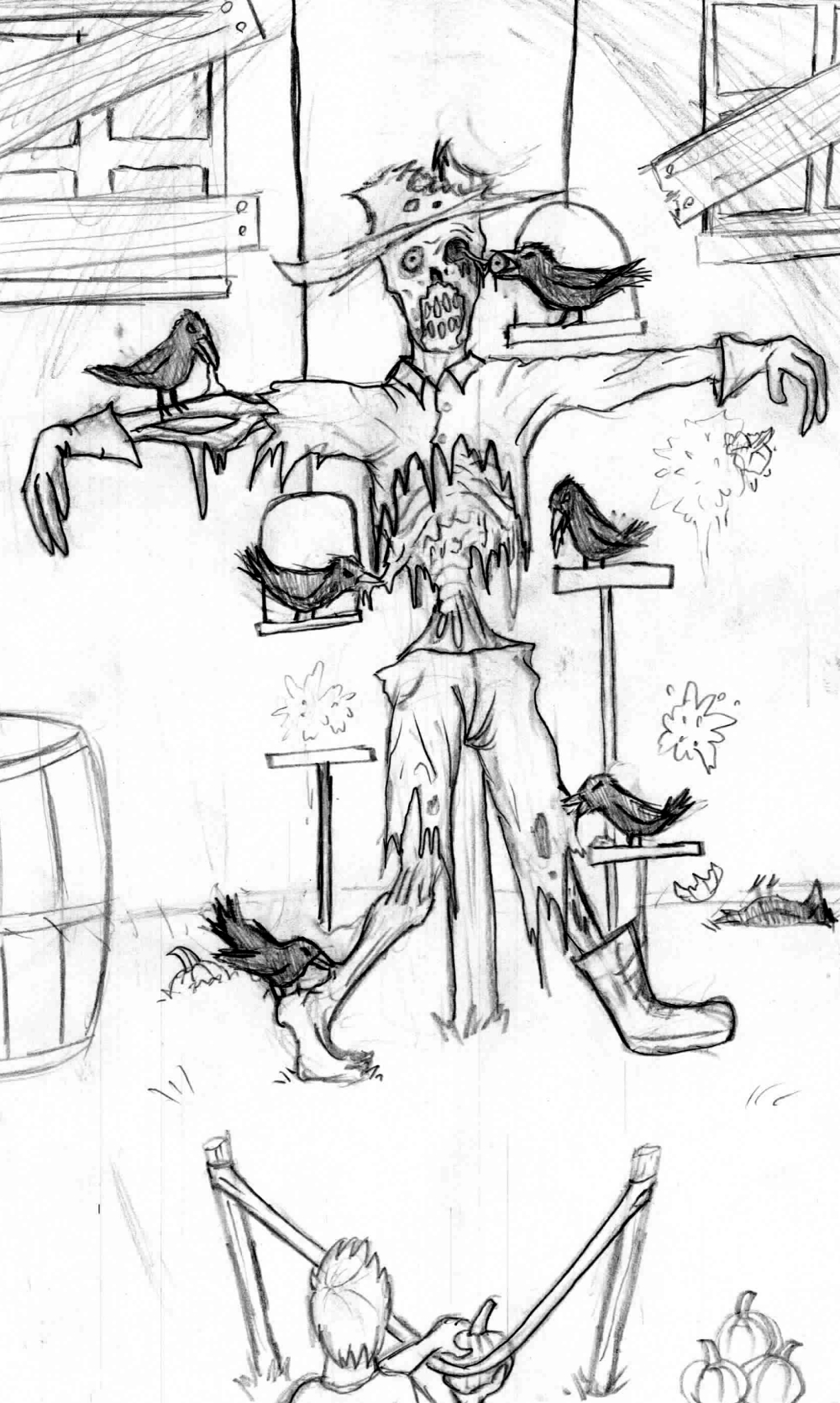 Players test their strength by getting (3) attempts to Ring the Bell with the decapitated Zombies severed head. Once the player strikes the target, the zombie’s body thrashes and jerks while his severed head races toward the bell. This game provides a quick and simple side attraction with minimal upkeep. Available in Adult and Child sizes to involve every attendee. Give prizes for each height marker reached, or only for ringing the bell. 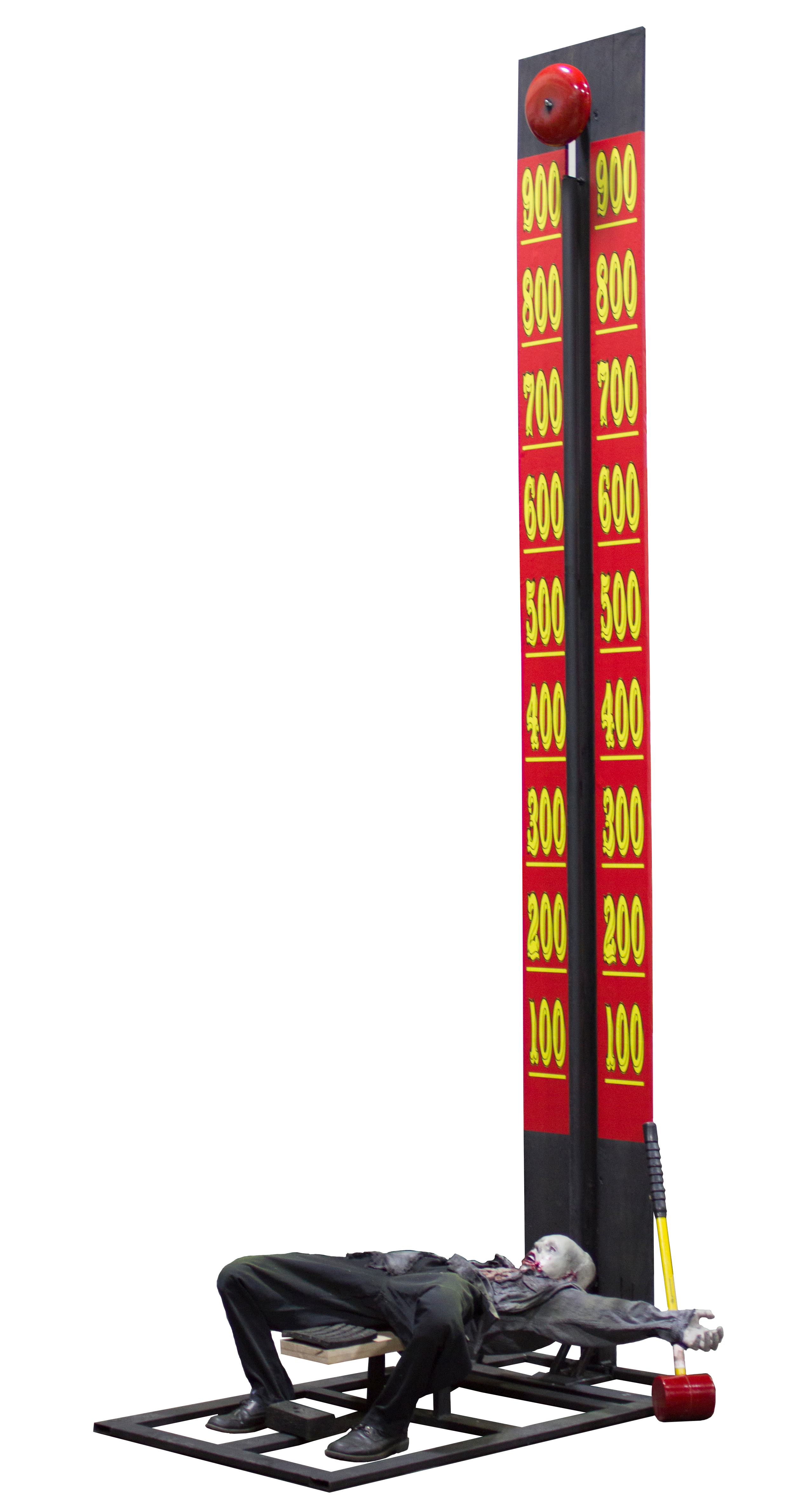 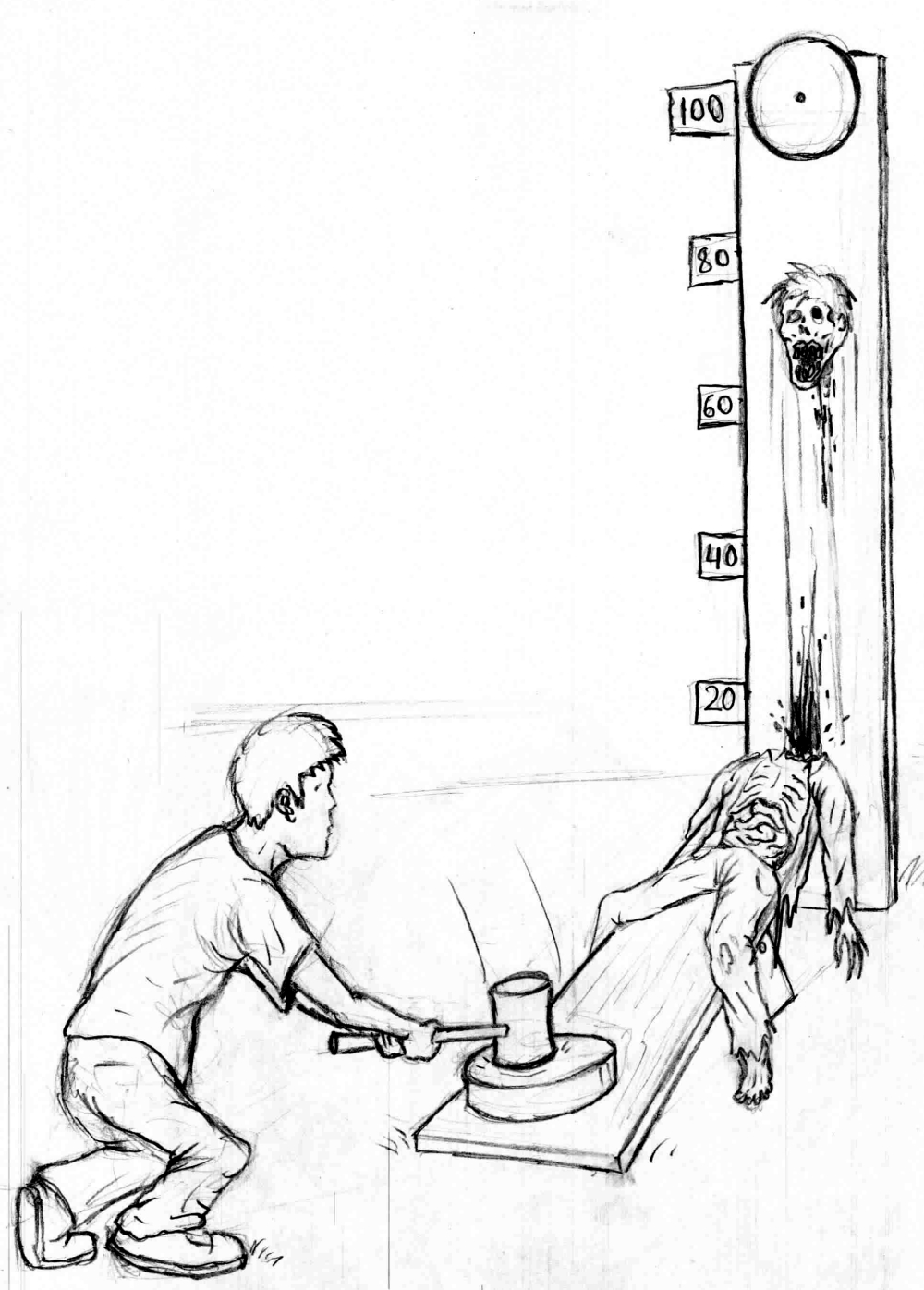 Top your carnival games off with themed facades. You can use our game names or choose your own.

To make a purchase or ask questions about our Horror Carnival Games, please send an email to scarefactory@msn.com